This plan is nothing new: increase the tax rate on the income of middle class in order to shave a small amount off for the rich.

Economically, that’s like turning on all the accessories when you’re trying to start an old car on a cold day.

Rep. Paul Ryan’s tax and spending “roadmap” is a fascinating critter: conservatives all praise it to the skies but none of them want to actually commit to supporting it. The reason for their hesitation is obvious: Ryan’s plan would cut spending dramatically, and supporting it would mean having to explain what, exactly, they’d cut. That would be electoral suicide and they know it. They much prefer their usual game of loudly denouncing “spending” without ever having to say what spending they’re actually opposed to. 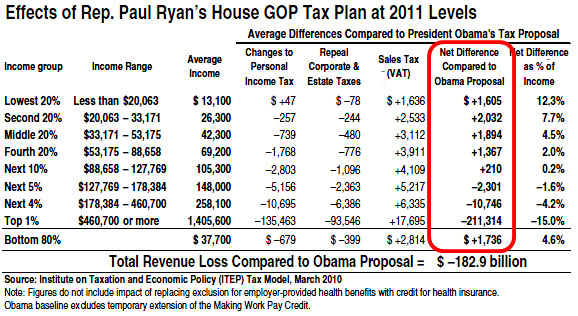 via Paul Ryan’s Plan to Tax You More | Mother Jones.