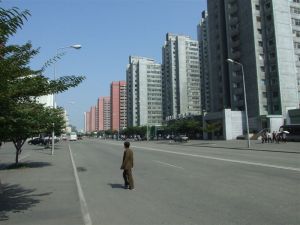 I’ve been spending 10+ hours / a day at work and unpacking from my move, so the posts have been few and far between this week. I hope to pick it up next week.

Check out this great article: Infrastructurist, one of the best blogs on the net IMO, did a story on the Democratic People’s Republic of Korea, one of the most fascinating subjects around.

Last year, two Austrian tourists managed to enter North Korea by train at a border crossing that has been closed to foreigners since 1994. Lucky for us, they took lots of pictures. Below are a few samples from their extensive documentation of their trip (see the full visual and narrative account here, here and here). They also hit Pyongyang–a city 3 million people that does see a bit of tourist traffic–and took some special photographic interest to the city’s infrastructure, especially trams.

Pyongyang boasts a subway system buried deeper underground than any other on earth; this is done so that the system might better survive a blast from atomic weaponry. It might also serve as a makeshift bomb shelter. There are rumours that the public transit system also connects to a much larger non-public underground rail system extending well beyond the city’s surface infrastructure.

It reminds me of the PRC’s subterranean submarine base on Hainan Island. Don’t miss photos of that base on the FAS website. And let’s not forget the tunnels dug by the Viet Cong. Apparently, Mao liked to dig.