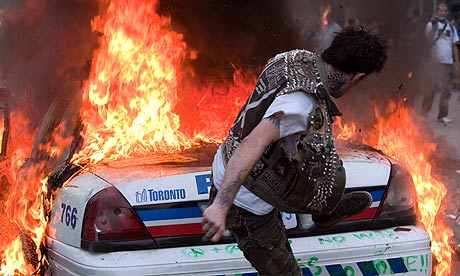 Earn your coworkers’ respect and extra (hazard) pay! Get the adrenaline rush you crave and take the fast track to an exciting career in domestic counterintelligence!!!

Groups of undercover police were repeatedly identified by protesters at marches occurring between Monday and Wednesday. Some were reportedly wearing black baseball caps, bandannas with marijuana leaf-designs on them, and patches with Che Guevara on them. When asked by journalists if they were police, none denied it. Several arrests were made each day, habitually after the days’ demonstrations had dispersed and people were leaving the scene. 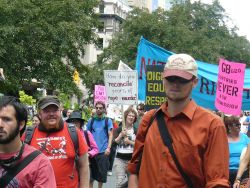 Then I caught wind of this little gem:

A number of police cars were set on fire. They were abandoned in the middle of intersections beforehand, and stripped of all their equipment by police–the cars were discovered to have been damaged previously, which led to reports that the police had purposefully left the cars there as bait, hoping to tempt protesters to set the cars on fire, in order to justify their own violent acts. Later accounts led many to believe that the fires themselves were set by undercover police, or agents provocateurs.

That’s a new one; the guy who thought up that one just made sergeant. 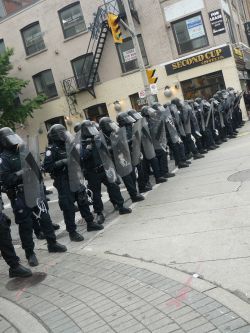 via The Erosion of “Rights”: a quick descent | Toronto Media Co-op.