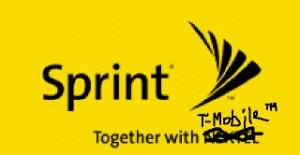 From a consumer standpoint, this just makes all kinds of sense. T-Mobile is generally regarded as having the worst cellular service of any carrier in the US market. Oftentimes, calls to handsets on their networks get redirected to voicemail without a single ring on the device. Incidentally, this does wonders for battery life, as the handsets are constantly straining to locate a signal.

Sprint’s strongest selling points are that they are

1) A major US telco carrier with nationwide backbone, terrestrial and IP services
2) One of two nationwide digital CDMA carriers (the other being Verizon) that provide the best cellular reception in the US.
3) Poised to revolutionize the industry with Wi-Max technology.
4) At $3 a share one could become a majority shareholder for just under $5 billion.

That’s not to say there are no downsides.

Sprint is saddled with lots of debt and a all-but-worthless iDEN network from its Nextel acquisition. They are hemorrhaging customers. CDMA technology is not used much outside the US – it isn’t the global alternative that GSM phones are.

Finally, Sprint seems to have trouble wooing killer handsets from manufacturers. They have iPhone, no Storm, no Googlephone. They have no exclusive on anything – except the Palm Pre and that has yet to prove itself in that same league of popularity.

T-Mobile’s weak infrastructure dilemma would benefit tremendously from Sprint’s robust coverage network. Conversely, T-Mobile could provide all the GSM fun times that are lacking from Sprint’s CDMA phones. If they could make dual-network handsets work they could become the most featureful carrier in the US.

I’m just saying, is all.